APO will be attending the Global Evidence and Implementation Summit (GEIS) 2018 this October – in the lead up, we offer a taste of some of the speakers. Richard Weston, CEO of The Healing Foundation, Canberra Australia, is a keynote speaker at the Global Evidence and Implementation Summit (GEIS) 2018, being held from 22-24 October in Melbourne, Australia. In this blog post, Richard describes how The Healing Foundation is using evidence to better understand and respond to intergenerational trauma for Aboriginal and Torres Strait Islander people. Richard will present more about the organisation’s work at GEIS 2018.

The Healing Foundation in Australia, a national Aboriginal and Torres Strait Organisation, is focused on eliminating intergenerational trauma and supporting our people to heal. We are not inherently ‘bad’ or ‘criminal’ people, although we make up disproportionate numbers in the child protection, juvenile justice and adult corrections systems in Australia. For example, we comprise almost one-third of the adult prison population but are only 3% of the overall population of Australia.

A key focus of The Healing Foundation has been to work with the Stolen Generations, those children that were forcibly removed from their families under Australian laws for a large part of the 19th and 20th centuries up to 1972. A report was released recently by the Australian Institute of Health and Welfare (AIHW) and The Healing Foundation entitled: ‘The Stolen Generations and their descendants. Numbers, demographic characteristics and selected outcomes.[1]’

The story of alarming disadvantage doesn’t end with the Stolen Generations. This report also shows that the negative trauma impact of past atrocities is having an intergenerational effect on their descendants.

According to the AIHW report, descendants consistently experience poorer health and social outcomes. For example, compared to other Aboriginal and Torres Strait lslander people of the same age group who were not descendants of the stolen generation, they were:

When the comparison is made between Stolen Generations (and their descendants) and non-Indigenous people, the picture is far worse.

Evidence from the US that emerged in the mid-90’s[4] helps explain what we are seeing with our Stolen Generations and their descendants. Coupled with the AIHW study, we now have evidence of the life-long impact of trauma and its intergenerational effects. So, joining the dots between the real life experience of trauma from the AIHW analysis of Stolen Generations and their descendants, and the science of the US evidence, we can look at the forced removal of children in a different light.

Australia can move as a nation from denial—which has resulted in responses that are focused on dealing with hurt feelings, grief, sadness and commemoration (which are not unimportant)—to include the biological and psychological impacts of trauma that last a lifetime and are passed on to the next generations. We have been looking in the wrong place, through the wrong lens.

The experience of Stolen Generations is not to be held up to our nation to make non-Indigenous people, who had nothing to do with the forced removal of Aboriginal children, feel guilt or to be blamed for that past. The reason to hold up the experience of the Stolen Generations is to fix a problem that is pervasive in Australian communities. The AIHW demography analysis reliably estimates that 1/3 of Aboriginal adults today in Australia are descendants of the Stolen Generations who are potentially affected by trauma. The forcible removal of Aboriginal children from their families was not a random process that took a child from here or a child from there. It was systematic, and it affected whole communities with the ‘Bringing Them Home Enquiry 1997[5]’ estimating between 1in 10 and up to 1 in 3 children being taken, this amounts to tens of thousands of children forcibly removed. There is clearly a need for a response to this situation for Stolen Generations, their descendants and our communities—it needs to be national and it needs to be comprehensive.

I look forward to talking more with you about The Healing Foundation’s work at the Global Evaluation and Implementation Science Conference in Melbourne from Oct 22 to Oct 24. You can register for the summit here. I hope you can make it.

1 Australian Institute of Health and Welfare 2018. Aboriginal and Torres Strait Islander Stolen Generations and descendants: numbers, demographic characteristics and selected outcomes. Cat. no. IHW 195. Canberra: AIHW.
2 Ibid.
3 Ibid.
4 Relationship of Childhood Abuse and Household Dysfunction to Many of the Leading Causes of Death in Adults, The Adverse Childhood Experiences Study, Felitti et al in the American Journal of Preventative Medicine, 1998.
5 Bringing Them Home, National Inquiry into the Separation of Aboriginal and Torres Strait Islander Children from their Families, Human Rights and Equal Opportunity Commission 1997.

More resources on this topic can be found by typing the search term stolen generation into apo.org.au.

Register or find out more about the Global Evidence and Implementation Summit (GEIS) 2018, being held in Melbourne from 22-24 October. APO is hosting the APO Forum 2018 the day after GEIS – on 25 October in Melbourne – with this year’s theme focusing on: Redesigning the Public Knowledge System: New Tools and Strategies for Research, Policy and Practice. Both events will provide both researchers and practitioners with a wealth of expert speakers. 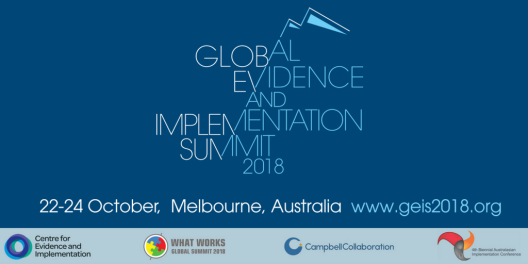 View all posts by Emily Silvester